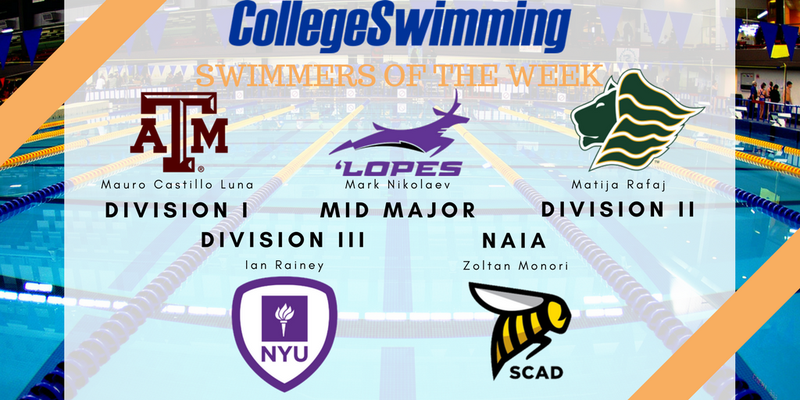 Mauro Castillo Luna grabs this week’s National Swimmer of the Week for Division I. Castillo Luna swept both breaststrokes, and added a win in the 200 IM to help lead Texas A&M to their first victory over Texas since 1962. On the Women’s side, Janet Hu of Stanford earns this week National Award after winning 7 events throughout the weekend in dual meet wins against NC State and Oregon State.

This week’s Mid Major National winners are Sadie Fazekas (Akron) and Mark Nikolaev (Grand Canyon). Fazekas swam a lifetime best in the 100 back this weekend against Eastern Michigan. Nikolaev earned the award after a dominating performance against Air Force where he swept both backstrokes, both IMs, and grabbed 2 relay wins.

For Division II, Bailee Nunn of Drury and Matija Rafaj of Saint Leo won this week’s National Awards. Nunn showed her versatility at the Drury Invitational as she won both breaststrokes, 100 fly, 200 IM, and grabbed a 2nd place finish the 100 free. Rafaj helped Saint Leo to a victory this weekend as he swept the 500 and 1,000 frees in times that place him 15th and 9th, respectively, in Dvision II.

These selections are independent of selections made by each conference.  Winners are selected from results submitted by Midnight EST each Monday.